This local Derby was always going to be a close run affair with the success of both teams based on their fitness and their ability to run the ball around the park. The result of the game was in doubt right up until the final whistle but post-match analysis showed three key moments that decided the outcome, two of them involved Reeds fly half Pete Davidge. The first of them happened when the Georgian winger intercepted a loose pass within his own half, the defence was caught flat footed and it looked a certain seven pointer, but Pete Davidge is seriously quick and he chased the winger and brought him down close to the line, no question, a try saving tackle. The second occasion followed from a Reeds score, close to the corner flag, Pete Davidge’s conversion from way out went right between the sticks, the importance of that conversion didn’t become apparent until later on. The third key moment came during the last five minutes or so of the game when Reeds were in the lead by four points, OG’s were awarded a penalty on the 22 metre line. Earlier on OG’s had scored a try with a rolling maul from a five metre lineout, they couldn’t win the game from the penalty and already had a losing bonus point in their pockets so surely a chip to the corner followed by a rolling maul was the right choice. Instead, OG’s went for the penalty which went over, leaving a one point difference in the scores. OG’s were now banking on their ability to win a match via a penalty late in the game but despite getting into Reeds half in those dying minutes, they didn’t get another shot at goal and Reeds came away with the points. But back to the early moments, Pete Davidge exchanged penalties with OG’s skipper Jack Cooney, and then following a flurry of yellow cards Cooney banged over another penalty to make it 6-3. Reeds first try came shortly before the break, they were close to the line with a series of forward attacks but it was the quick fire passing out wide with a crucial final flat pass from full back Jonny Rogers that enabled young Rhys Lewis to step inside the covering defence and touch down way out for Pete Davidge to hoist over that crucial long range conversion. At the change round Reeds led 10-6 but there was nothing between the two sides with both defences on top and each side’s similar styles tending to cancel each other out particularly in mid field. Reeds skipper Billy Maddock and outside centre Tom McClean, try as they might, couldn’t bust their way through the powerful OG’s defence – they came close, but it was a huge defensive clearing kick from the OG’s full back when Reeds had wastefully kicked the ball away deep within the OG’s 22 that in turn landed deep in Reeds territory that had them in trouble. There is nothing quite like the unpredictability of a bouncing rugby ball, it bamboozled the Reeds defence, Reeds hung on to the ball rather too long and OG’s were awarded a penalty. They poked the ball into the corner, a lineout, rolling maul and Demi Obembe the back row man crashed over to put the home side in front by three points. Reeds and OG’s exchanged further penalties but Reeds now responded by upping their efforts. Lock Joe Wastie ran a good angled line near to a ruck and burst through the cover defence making 15 yards and offloading neatly to winger Moriarty who, pumping his legs, drove forward with players hanging off him to the OG’s 5m line. From there it was Josh Brown, Reeds all round ball handling prop forward, who spun out of the tackle and crossed over for Reeds second try. Another siege gun conversion from Davidge and Reeds were into that four point lead with ten minutes on the clock. OG’s were now on the march in search of the win but Reeds managed to see out the game and secure a good victory against a talented Georgian side. This was a game with some thunderous forward clashes that was played in good spirit, and it was young Herbie Finn the athletic lock forward coming back from injury who was such a rock in defence that earned him the Man of the Match Award, narrowly pipping hooker George Corner who was such a menace at the break down. 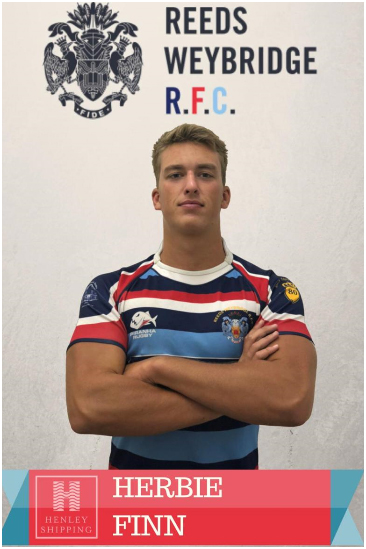 Next week Reeds journey down to Gosport and Fareham, the strong and physical town side, for their third league game, kick off 3:00pm.