Reeds anticipated that their visitors would arrive with a sizeable pack and they certainly had some real problems containing a set of big, well drilled, Warlingham forwards led by second row James Dellafield who rumbled around the park denying Reeds any quality possession during the first half. With Reeds playing down the slope, the visitors won plenty of ball and camped in Reeds territory getting ever closer with their rolling mauls – indeed it was only desperate last ditch defence that kept the line secure from the Warlingham forwards who completely controlled the pace and tempo of the game during that period. Reeds full back Jonny Rogers exchanged penalties with Warlingham’s centre Joe McEvoy and it was McEvoy who was the instigator of the visitors try. He was a good forty metres out and hoisted a steepling cross field kick to the touchline, where their right winger caught the ball in mid-flight and offloaded to scrum half Alex Skinner to crash over the line leaving McEvoy to bang over the conversion from out wide to collect the extras. 10 – 3 to Warlingham and Reeds were on the rack and finding it difficult to get the ball into the open spaces away from the forward exchanges. Jonny Rogers the Reeds full back kept Reeds in the game with two long range penalties but Warlingham’s McEvoy slotted another penalty just before the break to put his men into the lead with a four point margin and with the slope in their favour to come, it didn’t look too good for Reeds. However, something in Reeds half time refreshment worked wonders for Reeds, and straight from the re-start Reeds moved into a different gear that saw them score 25 unanswered points with Herbie Finn, Reeds athletic lock forward, collecting the high ball and setting off up-field. This in turn signalled a series of penetrating moves that included forwards and backs with skipper Maddock to the fore with a number of penetrating runs from midfield. Rogers, the full back collected another long range penalty and then Herbie Finn crashed over from a loose maul close to the Warlingham line. A six point lead then became a nine point lead after another Rogers’s penalty. Reeds had upped the pace from all parts of the park, Ollie Palmer the scrum half was causing problems with his quick fire response to penalty awards and sharp thrusts from the base of the scrum – now it was Reeds setting the tempo and Warlingham were struggling to keep up with the pace of the game. Reeds backs were on the march and there was a suspicion that those big Warlingham forwards were struggling with their fitness, whatever the reason it was Reeds who were camped deep in Warlingham territory for long periods and looking dangerous with every attack. Points had to come and it was Tom McClean the centre who danced round the defence to extend the lead with Reeds second try of the day. With ten minutes to go, Joe Moriarty Reeds strong running winger, so difficult to stop in full flight and with the ability to retain the ball in the tackle managed to offload to Douw Styger, Reeds No 6, who bashed his way over the line to make sure of the result. It was young Styger, such a dominant force in the loose exchanges, who was awarded the Man of the Match Award for his outstanding contribution, particularly in that first half when the visitors pack threatened to overwhelm the Reeds defence. Reeds continued to press for the 4th try and though they had scored from a delicate chip and chase only for the referee to chalk off the score for a marginal offside. With the clock showing around a minute to play Warlingham were determined to avoid conceding another try and maintained possession through a series of close quarter drives until time was up and they could boot the ball off the field. 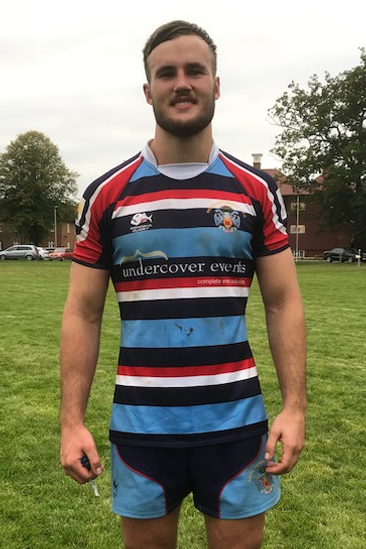 Next week Reeds take a break from their first block of league fixtures and are in the first round of the Senior Vase Cup. Harrow, who are riding mid table in London North West 3, are the visitors to Reeds Weybridge attractive ground at Whiteley Village, next Saturday. Kick off 14.45.